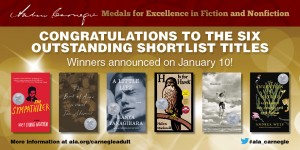 The American Library Association today announced the six books shortlisted for the Andrew Carnegie Medals for Excellence in Fiction and Nonfiction, awarded for the previous year’s best fiction and nonfiction books written for adult readers and published in the United States. The two medal winners will be announced by selection committee chair Nancy Pearl at the RUSA’s Book and Media Awards event at ALA Midwinter Meeting & Exhibits in Boston on Sunday, January 10.

“H is for Hawk,” by Helen Macdonald, published  by Grove Press, an imprint of Grove Atlantic, and distributed by Publishers Group West.

“Hold Still: A Memoir in Photographs,” by Sally Mann, published by Little, Brown, and Company, a division of Hachette Book Group, Inc.

“The Book of Aron,” by Jim Shepard, published by Alfred A. Knopf, a division of Random House, LLC. New York.

“A Little Life: A Novel,” by Hanya Yanagihara, published by Doubleday, a division of Random House, LLC. New York.

“The Sympathizer,” by Viet Thanh Nguyen, published by Grove Press, an imprint of Grove Atlantic, and distributed by Publishers Group West.

This is the first time the Carnegie Medal winner announcements will be made at Midwinter Meeting & Exhibits, reflecting a new calendar for the awards, with the shortlist announced in October, the winners in January, and the popular celebratory event continuing at ALA Annual Conference each year. Winning authors each receive $5,000, and the four finalists each receive $1,500.

The Medals are made possible, in part, by a grant from Carnegie Corporation of New York in recognition of Andrew Carnegie’s deep belief in the power of books and learning to change the world, and are co-sponsored by ALA’s Booklist Publications and the Reference and User Services Association (RUSA).