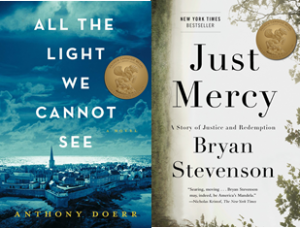 The eagerly anticipated announcements  of the Andrew Carnegie Medals for Excellence in Fiction and Nonfiction took place on June 27, 2015 at the American Library Association’s annual conference in San Francisco. Anthony Doerr, author of the Pulitzer Prize-winning novel All The Light We Cannot See was awarded the Carnegie medal for fiction, and Bryan Stevenson, author of Just Mercy, was awarded the Carnegie medal for nonfiction.

The Carnegie Medals are ALA’s only single-book award for adult trade fiction and nonfiction, cosponsored by Booklist and RUSA. For more information about the awards and selection committee, visit http://www.ala.org/rusa/awards/carnegie.

The American Library Association (ALA) today announced the six books shortlisted for the esteemed Andrew Carnegie Medals for Excellence in Fiction and Nonfiction, awarded for the previous year’s best fiction and nonfiction books written for adult readers and published in the U.S. As part of an announcement and medal presentation event at the 2015 ALA Annual Conference in San Francisco in June, each winning author will receive $5,000, and the four finalists will each receive $1,500.

Just Mercy: A Story of Justice and Redemption, by Bryan Stevenson. Published by Spiegel & Grau, an imprint of Random House.

Stevenson, founder of the Equal Justice Institute in Montgomery, Alabama, delivers a passionate account of the ways our nation thwarts justice and inhumanely punishes the poor and disadvantaged.

The Sixth Extinction: An Unnatural History, by Elizabeth Kolbert. Published by Henry Holt.

Kolbert combines travel adventures, lucid science, and informed and awestruck descriptions of natural wonders, from rainforests to the Great Barrier Reef, to forthrightly address the deleterious impact our use of fossil fuels is having on the very fabric of life.

Thirteen Days in September: Carter, Begin, and Sadat at Camp David, by Lawrence Wright. Published by Alfred A. Knopf, a division of Random House LLC.

Pulitzer-winning journalist Wright presents a riveting blow-by-blow analysis of the historic 1978 meeting between Egypt and Israel brokered by then-president Jimmy Carter. A moving testament to the art of diplomacy that almost invites optimism, even as prospects for peace in today’s Middle East dim.

All the Light We Cannot See, by Anthony Doerr. Published by Scribner, a division of Simon & Schuster, Inc.

Through the intertwined stories of a sightless French girl and a German soldier, Doerr masterfully and imaginatively re-creates the harsh conditions in WWII-torn France and the strictly controlled lives of the military occupiers.

In Tóibín’s remarkably subtle, witty, and affirming story, the Ireland of four decades ago and the conundrums women faced are beautifully evoked through events in the three-year widowhood of fortysomething Nora Webster.

On Such a Full Sea, by Chang-rae Lee. Published by Riverhead Books, a member of Penguin Group (USA).

As young Fan searches for her missing boyfriend in an America devastated by climate change and a pandemic, Lee brilliantly imagines extreme survival tactics, psychological trauma, and the resurrection of art and its solace.

The awards, established in 2012, recognize the best fiction and nonfiction books for adult readers published in the U.S. in the previous year and serve as a guide to help adults select quality reading material. They are the first single-book awards for adult books given by the American Library Association and reflect the expert judgment and insight of library professionals who work closely with adult readers. Brad Hooper, Adult Books Editor at Booklist and winner of the 2015 Louis Shores Award for excellence in reviewing, serves as chair of the 2015 awards selection committee.

The awards are made possible, in part, by a grant from Carnegie Corporation of New York in recognition of Andrew Carnegie’s deep belief in the power of books and learning to change the world, and are co-sponsored by ALA’s Booklist Publications and the Reference and User Services Association (RUSA).

Annotations and more information on the finalists and the awards can be found at http://www.ala.org/carnegieadult.

About Carnegie Corporation of New York
Carnegie Corporation of New York was created by Andrew Carnegie in 1911 to promote the advancement and diffusion of knowledge and understanding. In keeping with this mandate, the corporation’s work focuses on the issues that Andrew Carnegie considered of paramount importance: international peace, the advancement of education and knowledge, and the strength of our democracy.

RUSA has selected the winners of the 2015 achievement awards.Winners receive research and travel grants that recognize the profession’s most exceptional librarians, libraries and projects involving reference services today.

“RUSA’s Achievement Awards provide us the very special opportunity to recognize the most outstanding librarians, libraries and projects in the field. At this event we also highlight the successes of our future leaders on what they’ve worked so hard to achieve. These awards recognize important contributions and allow our next generation of leaders to gain further experience through attendance at the ALA Annual Conference and conduct further research,” said RUSA President Joseph Thompson. “I want to congratulate this year’s award recipients on their accomplishments. We look forward to celebrating with everyone in June at the RUSA Achievement Awards Reception in San Francisco — one of the signature events of the ALA Annual Conference. I would like to sincerely thank the members of our award committees for their invaluable volunteer work through the selection processes and our generous sponsors for their support.”

Isadore Gilbert Mudge Award, RUSA’s highest honor, sponsored by Gale Cengage Learning, offers $5,000 and a citation to an individual who has made a distinguished contribution to reference librarianship. Denise Beaubien Bennett, engineering librarian, University of Florida, was selected for her instrumental shaping of the instructional program for thousands of students in many disciplines, with a reputation for inspired teaching and creation of many online and video tutorials and presentation of workshops nationwide.

Gale Cengage Learning Award for Excellence in Reference and Adult Services, sponsored by Gale Cengage Learning, offers $3,000 and a citation to a library or library system for developing an imaginative and unique resource to meet patrons’ reference needs. Lauren Comito was selected for the development of the interactive database “Where in Queens?,” which uses GPS technology to help users connect to social services that are closest to where they are located at any given time.

NoveList’s Margaret E. Monroe Library Adult Services Award, sponsored by NoveList, which offers $1,250 and a citation to a librarian who has made significant contributions to library adult services. Neil Hollands, adult services librarian, Williamsburg Regional Library, was selected for being a leader in the Readers’ Advisory (RA) world. Holland’s development and advocacy of form-based RA has been a tremendous advancement in RA services.

Reference Service Press Award, sponsored by Reference Service Press, consists of $2,500 and a plaque which recognizes an author(s) of the most outstanding article published in Reference and User Services Quarterly (RUSQ), RUSA’s research journal, during the preceding two-volume year. Pauline Dewan, Laurier/Nipissing liaison librarian for the Brantford, Ontario campuses of Wilfrid Laurier University and Nipissing University was selected for her article, “Reading Matters in the Academic Library: Taking the Lead from Public Librarians.” Summer 2013, Volume 52, Issue 4. This article explores the idea of revitalizing academic libraries by reconsidering the place of pleasure reading in them.

John Sessions Memorial Award, consists of a plaque sponsored by the Department for Professional Employees, AFL-CIO, and recognizes a library or library system that has made a significant effort to work with the labor community and by doing so has brought recognition to the history and contribution of the labor movement to the development of the United States. The Calcasieu Parish Library System was selected for its Southwest Louisiana (SWLA) Workforce Resource Guide. The guide offers essential step-by-step instructions for job seekers and providing contact information and guidance for where to go, who to call and what to say.

The RUSA Achievement Awards Ceremony and Reception will be held from 5-6:30 p.m. Sunday, June 28 at the ALA Annual Conference in San Francisco. All conference attendees are invited to the event. Additional event details will be available on the conference website in April.

Nominations and supporting materials for most awards must be submitted by December 14, 2014.

Achievement awards for individuals and groups:

Travel awards to the ALA Annual Conference:

*Monetary award amounts are subject to change without notice and are contingent upon donor funding supplied at the time the award is presented. Questions about these awards should be directed to the committee chairperson—access committee contact information by logging in at www.ala.org, then accessing the RUSA roster webpage—or to the RUSA headquarters staff.

More information about these awards, including nominating instructions, can be found on RUSA’s awards webpage.